This last January, on New Year’s Day, I turned on my television set and watched the Pasadena Rose Parade and the Rose Bowl Game, as I have been doing, I recently realized, for more than half a century. For me, as for millions of others who have watched or attended the game and the parade over the decades, this New Year’s Day ritual is part of my identity and the culture of my country. Like anything that is deep in one’s consciousness, watching the parade and the game is for me almost an unreflective act. It is simply part of who I am. In recent years, however, I have begun to sense how much the whole thing has been changing, and how much the changes reveal about American life. I first heard the words “Rose Bowl” in the early 1950s, around age eleven, when my family and I lived in Berkeley and my young friends and I made the trek, on Saturdays in the Fall, to the University of California campus, where the ticket takers at the football stadium let us into the games for free. Midst all the cheering and pageantry and exciting plays, there was always speculation whether Cal would “go to the Rose Bowl,” even though, in most years, the team did not.

But in 1959 Cal did make it to the Rose Bowl, led by their All-American quarterback Joe Kapp and their great coach Pete Elliott, who had installed a “Split T” offense that gave his talented players an advantage over teams that relied upon the less deceptive, traditional “T” offense or the brawny, simple-minded “Single Wing” formation. 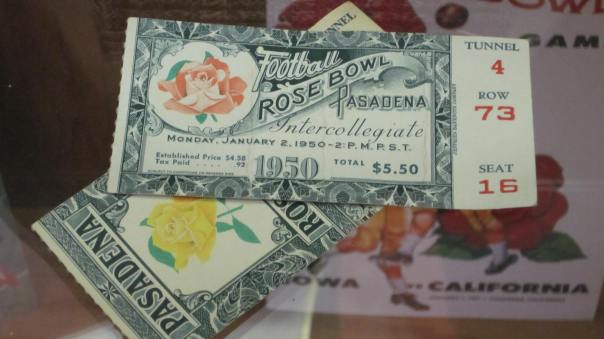 This happened to be the season when, at age 15, with my best friend Steve, I had a job selling football programs before each game. When the news came that Cal would be going to the Rose Bowl, Steve and I learned that we were among the top sales boys and would be eligible to sell programs in Pasadena and would probably be able by this means to earn enough to pay for our travel, with free admission to the game guaranteed. 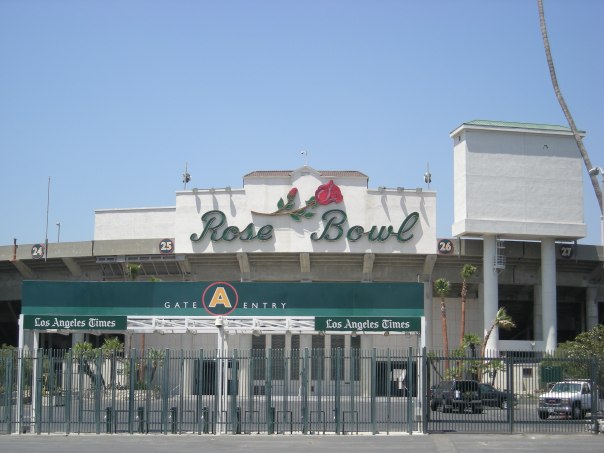 When the time came, Steve and I took the Southern Pacific train down to Los Angeles where we stayed with friends of his family. From there we made our way via a combination of buses and old trolley cars to Pasadena, where we encountered an almost deserted Colorado Avenue and learned that we had arrived too late to see the Rose Parade. But we were early enough to arrive at the stadium well before the game, and to make a good profit as sales boys. The game itself was disappointing in some ways. We did get free admission, but had to sit in the aisles on the cement stairs because all the regular seats were for paying customers. The location of our seats was a long way from the field, the players looked like dots, and it was difficult to follow the action. The stadium itself felt very old, with its weathered, splintery timbers, and lighting that proved to be inadequate as twilight neared. Worst of all, Cal lost to Iowa. But the pageantry was unbeatable, and I still cherish the fact that I can say I once actually went to the Rose Bowl. The Rose Bowl game at that time was still frequently referred to as “the grand daddy of them all,” in honor of the fact that, having begun in 1902, it was the oldest bowl game. It was truly a national event. At the same time, it was an integral part of the identity of the state of California, an affirmation of pride in a vibrant region of the country.

But things have changed over the years. Los Angeles no longer has its old trolley cars. The Southern Pacific railroad no longer exists, and the view cars you get on today’s AMTRAK are no rivals for the old Vista Dome that was proudly featured in every SP magazine ad. Today, if you make the journey to the Rose Bowl game, you are likely to fly or, thanks to much better highways and upscale motels, to drive. And today, in probably the biggest change of all, the Rose Bowl game occupies a much different place in national life. It is no longer a good-natured competition between two regions, the Pacific Coast Conference and the Big Ten of the Midwest. It is now a way station on the road to the National Championship. And the announcers for the game no longer project a feeling of being in people’s homes as part of a family gathering. Instead, the phrasing and accompanying toughness of voice is mostly about who has just “made the hit,” who is “dominant,” and who “is a contender for the pros.” The Rose Parade, likewise, is a more high-pressure event. The amounts spent by corporations to create prize-winning floats are enormous. The television announcers do little more than read from their briefing books. There are just as many plugs for TV network shows during the parade as there are actual commercial during the breaks.

Some things do remain the same, of course. There are smiling boys and girls in marching bands drawn from all around the world. The local community service clubs sponsor floats. There are the numerous, very happy queens and princesses and sub-princesses. The military bands play the rousing songs. The mounted horse formations strut their stuff in their ornate Spanish costumes. The floats, even today, continue to be made from all natural materials: seven thousand petunias, four thousand and twelve zinnias, six hundred begonias carefully intermixed with orchids to form a faithful representation of the solar system.

The Rose Bowl that I knew as a boy was by no means perfect. To take two examples: The press never talked about the fact that Cal’s star quarterback, Joe Kapp, was the product of a troubled childhood in a racially segregated community. By sanitizing his biography to make him into a mainstream American, the press diminished Kapp’s achievement. Nor was it disclosed, until a couple of years later, that Cal’s seemingly upright coach, Pete Elliott, had been breaking the rules with regard to players’ financial aid. But I do believe something has been lost over the years as the Rose Bowl has become like the world of professional football. Someday, I’m sure, a few decades from now, someone who is the age I am now will look back with nostalgia on the Rose Bowl of today. That will be OK, I suppose, as long as the petunias and the zinnias continue to be all-natural.