Several decades ago, in a remark that quickly became famous, the novelist and historian Wallace Stegner said that California is the West, only more so. California is the westernmost portion of the Continental United States. It offers the hope of being on a frontier, but also the reminder that you can’t keep moving west forever, that at some point you must make your peace with finiteness. Since the time of the Gold Rush, and in its abundance of land waiting to be developed, California has held out the prospect of sudden wealth mixed with the awareness that not every scheme will lead to riches. And ever since the Gold Rush, California has attracted wave after wave of migrants, along with frequently chaotic appearance of new construction and urban sprawl to serve their needs. In all of this, California has evidenced the same pattern of development one can see in every area of the United States west of the Mississippi River. But in California the process has been more intense and more haunting.

I have been thinking about Stegner’s remark for the last several weeks, and I believe I have a new way of applying it, as the result of a vacation trip I took with my wife and a family friend. Most of our travel took place in and around the Rocky Mountains, as we visited Denver, Salt Lake City, Bryce Canyon National Park, and Zion National Park. Then, to conclude the trip, we stayed briefly in Las Vegas. My wife and I had not been there before, and we thought we ought to see it at least once in our lives, especially when we needed only a few extra hours of driving to get there.

I had seen many images of Las Vegas and was familiar with the standard lore associated with America’s capital of gambling and sin, so I did not expect to be surprised. But I was in fact astonished, both by the artificiality and by the kaleidoscopic feeling of the place.

The artificiality is probably the easiest to see. The whole city feels like it doesn’t belong there. It just comes up out of the surrounding desert. Except for the gambling and the federal money pumped into the surrounding area for things like dams and military installations, Las Vegas would have no economic basis. The architecture possesses almost no originality. There is a large copy of the Eiffel Tower.

An enormous hotel calls itself the Bellagio, even though it doesn’t much resemble the town of Bellagio on Lake Como in Italy. At the Venetian Hotel, appropriately costumed gondoliers give you rides along an imitation Grand Canal filled with chlorinated water; and inside the hotel, there is a replica, the size of a shopping center, meant to capture the look and feel of St. Mark’s Square, complete with fancy sidewalk restaurants, guided tours, air conditioning and a fully enclosed, painted ceiling five stories above you.

And then there are the entertainers. I lost track of the number of lounge acts featuring Elvis impersonators. In front of one hotel I stopped and stared for several minutes at a very large wall poster inviting met to buy a ticket to their long-running show: a three-hour reprise of the songs of Frank Sinatra, all performed by the city’s most celebrated Sinatra imitator.

I was also struck by the way Las Vegas conveys disorganization and a feeling of impermanence. Most of the city didn’t exist before the 1920s and the economic bonanza provided by construction workers from nearby Hoover Dam. The history that is there today is very recent. Away from the new Strip there is the older strip, mostly a creation of the post World War II era, with the old casinos like Binyon’s and the Golden Horeshoe, although a lot of the famous spots from the Rat Pack era, like the original Sands and the Desert Inn, have been torn down. But the new Strip, dating from three decades ago, after the Mob was kicked out and the casino owners tried to become family friendly, looks so clean and sanitary and un-weathered that it seems to have been built just yesterday. And the enormous buildings have simply been plopped down wherever, with little regard for zoning or long term urban planning. Sidewalks come to an end for no apparent reason. The copy of the Eiffel Tower overlooks the huge ornamental fountain of the Bellagio. A large, outdoor electrical power grid, about four stories high, occupies an entire city block surrounded by big, tall hotels: a violation of who knows how many fire laws.

Confronted by this bizarre world, I was at first judgmental and haughty, thinking of myself as a visitor from a superior civilization. But then I realized I was no such thing. I was a visitor from California, and Las Vegas is California only more so. 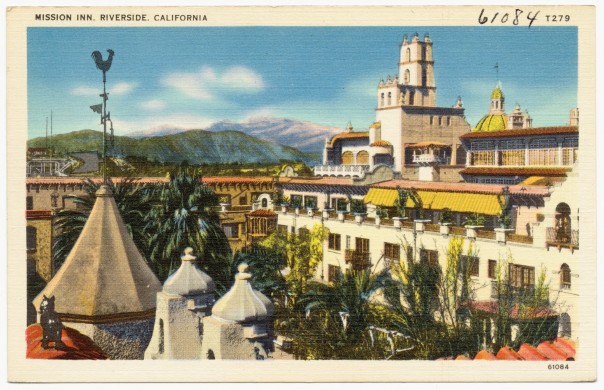 You can get a lot of echoes of Las Vegas in California’s amusement zones, places like Fisherman’s Wharf in San Francisco, the Boardwalk in Santa Cruz, the piers at Santa Monica, and Disneyland. Like Las Vegas, they all have the flavor of a carnival midway: magical and exciting and a little bit unsettling at night, slightly disappointing in daytime when the illusion is less intense. California has numerous architectural follies that resemble Las Vegas, like the Cliff House in San Francisco, the crazy hodgepodge of pieces from European villas that is the Hearst Castle at San Simeon, the Coronado Inn near San Diego, the strange amalgam of Spanish motifs that is the old Mission Inn hotel in Riverside. California has thousands of examples of residential developments that were badly zoned. Many of the buildings of California lack a feeling of permanence. The writer Joan Didion once singled out the California beach house as the ultimate architectural symbol of the state’s impermanence. She saw the same characteristic in Hollywood, where copies of entire environments are thrown together in one week and taken down in the next. These things are not the whole of California, but, I realized, they are enough to remind me that California and Las Vegas are not as unlike each other as I first assumed.